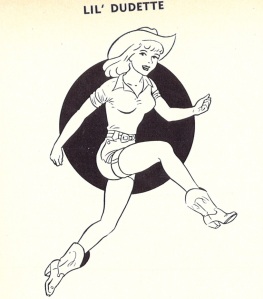 Through the years, there have been many creative methods implemented to talk about the great beef which is raised in Arizona. One of those ways, in the 1950s, was to create a mascot for Arizona beef. Reg Manning, a famous artist best known for his cartooned saguaro cactus with the prominent nose, created a character who fit the bill perfectly for this job. This cartoon character was named Lil’ Dudette, and she had a hearty message to share with everyone: “To keep yourself trim – Eat Beef – Keep Slim!”

In 1955, after using a mannequin version of Lil’ Dudette in shop windows to promote beef, it was decided a live version was needed to help spread the word at larger events like the Arizona State Fair. The Arizona State Cowbelles, a strong organization of women who share information about beef, were on a mission to find the perfect Lil’ Dudette and when a Cowbelle is on a mission (now and then) you better not stand in her way. It sounds like it was an easy decision as Connie Cook from Willcox fit the description wonderfully. The Cowbelles are even quoted as saying, “Connie looks exactly like Reg Manning’s famous character, Lil’ Dudette ‘ought to look.” Connie’s family was also deeply rooted in Arizona ranch history having been in the cattle business in Willcox since 1893. It was a perfect fit. 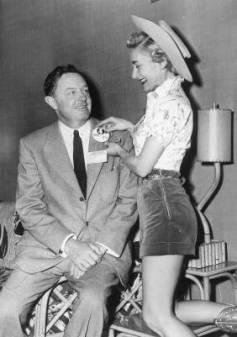 Connie Cook aka Lil’ Dudette is pictured pinning the “Phoenix in ’57” button on then American National Cattlemen’s President Jay Taylor. 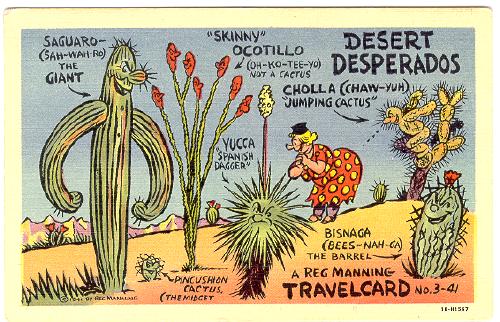 Reg Manning’s signature cartoon was the saguaro cactus with the large nose.

Lil’ Dudette, aka Connie, was a hit! She made appearances at the Arizona State Fair that year and drew a crowd. It is reported in the November 1955 issue of the Arizona Cattlelog that 10,000 “7 Ways for 7 Days” beef-recipe folders were given away and nearly 30,000 people entered into a drawing to win 25o pounds of choice beef donated by the Beef Council. In the next year, it was reported that there was a film was produced entitled, “Lil’ Dudette,” which was entered in the Beef Promotion Contest at the American National Cattlemen’s convention and it won first prize! 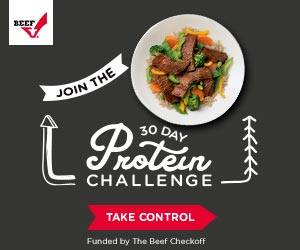 her slogan about eating beef to keep slim. Significant research shows that people looking to lose or maintain a healthy weight, support a healthy metabolism and/or age more vibrantly may benefit from consuming a balanced amount of high-quality protein, within calorie goals. Luckily for us, we have a few more tools than Lil’ Dudette did to help people achieve these goals. One of those tools being the 30 Day Protein Challenge which is a fun, step-by-step way to help you get an optimal amount of protein throughout your day. Significant research shows that some people can lose and/or maintain a healthy weight, support a healthy metabolism, and age more vibrantly when they consume more high-quality protein, within calorie goals. Interested? Check it out here.