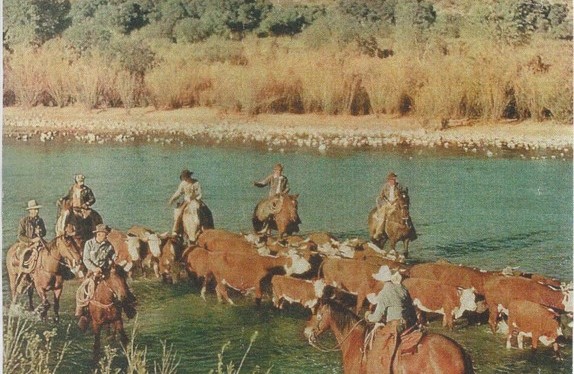 This piece was written by Janice Bryson, a great asset to the many organizations she is part of including the Arizona State Cowbelles. Janice’s family has a long history in ranching in Arizona and with their Irish lines, this seemed a perfect opportunity to feature the history of her heritage. Enjoy the history of a great Irish family who made their lives in Arizona along with a delicious Irish Beef Stew recipe to help your family celebrate the holiday!

Happy St. Patrick’s Day!  We Irish like to think everyone has little Irish on St. Patrick’s Day.  Patrick is the patron saint of Ireland and while it was originally a quiet day of church and family in Ireland, I think the Americans decided to make it a much more rowdy celebration which has spread around the world!

My great-grandfather William Ryan, born in County Tipperary, Ireland, arrived in the Globe mining camp in January 1881.  Several years later, he met my great-grandmother, Anna Mary Moloney, who come to Globe from County Limerick to work for her Uncle Denis Murphy.

Many Irish headed to the American West to strike it rich drawn by the reports of silver, gold and copper strikes.  A number of military forts were established to protect the miners from hostilities around the newly established mines and settlements.  This was a great age in Arizona Territory for an entrepreneur; who was going to feed and supply all the miners and soldiers arriving daily?  Many pioneer ranchers and farmers stepped up to help fill the needed food supply.

Most cattlemen in Arizona Territory followed the Texas system of ranching – cattle were left to graze on the free range to take care of themselves without supplementary feeding.  Denis Murphy branded the Wine Glass and ran his cattle northeast of Globe.  He also ran a butcher shop in conjunction with his ranch and even offered home delivery service.  The butcher shops would slaughter their cattle outside of town, doing the work at night. The meat would be cooled in the evening, brought into town before daylight and hung in homemade iceboxes. The shops would usually be sold out by noon and remained closed until the next morning.

We do have one story about Denis that has been passed down in family history.  He didn’t like his cowboys to ride the best horses into town on a Saturday night and tie them to the hitching posts outside of the Globe saloons.  He preferred the old horses to be stolen if there was a horse thief in town.

William Ryan became the night foreman at the Old Dominion Smelter and bought and sold cattle as a sideline.  He was also a livestock inspector and with his brother-in-law, John Moloney, established the first real dairy in Globe using range cattle.  I imagine they were a far cry from the current fine dairy cows we see today.

In later years, William and his sons leased rangeland on the Apache Reservation in the White Mountains for their cattle.  His oldest son, William Albert, was my grandfather who with his bride Edith settled in an isolated cabin on the Reservation in 1912.  The Apache men had not seen many caucasian women and would watch her through the window when Will was out riding.  She would offer them lunch which they gladly accepted; eventually, the novelty wore off and they no longer watched her.

While we still have isolated ranches, think of the days of no roads and riding horseback to the ranch house.  Will and Edith’s oldest son, William Paul, was born in White River and placed in an Apache papoose to be taken to the ranch.  At the age of 2, he walked behind a man chopping wood and was hit in the head with the back of the ax.  Will grabbed him and rode horseback many hours to the doctor in Fort Apache. Little William recovered but Edith was a very worried mother for four days before she knew if her son had survived his accident.

My father, Emmett Ryan, continued in the cattle business and in later years my family had cattle ranches at Florence Junction, Wenden and my favorite ranch, the Box Bar on the Verde River.  Lots of fun memories of them all for my family.

Life was tough in Arizona Territory and we are thankful we have so many modern conveniences to make our life better today.  Thank you to those pioneer cattlemen who persevered against all odds to provide food for the new Territory.  After all – those hardy pioneers needed plenty of ZIP – zinc, iron and protein provided by beef – to do their jobs.

St. Patrick’s Day was not all work and no play back in the day – St. Patrick’s Day Balls were held in settlements with heavy Irish populations such as Globe, Jerome, Bisbee, and Tombstone. Globe even held a baseball game between the “town boys” and the Old Dominion Copper Company on St. Patrick’s Day in 1890. Before either side had gained a point, the only ball burst.  It was stuffed with rags and the game continued with the town boys prevailing in the end.  Wonder what the baseball players of today would think of that game?

May the road rise up to meet you.  May the wind always be at your back.  May the sun shine warm upon your face, and rains fall soft upon your fields. And until we meet again, May God hold you in the palm of His hand.